You are here: Home1 / Christmas 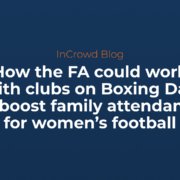 Boxing Day sport is a fantastic tradition. From Premier League football to Melbourne’s annual test cricket match, it is a true family occasion and has proven to generate well above average ticket sales. But what happens when your team is playing away? This is something experienced by many fans – left without a match to attend at a point in Christmas when, let’s face it, we probably all need something to get us off the sofa and away from Home Alone! So, what can be done to give those fans somewhere to go and something to do?

Thousands of empty seats and thousands of fans wanting to buy tickets
The Premier League designs a schedule to ensure away fans don’t have to travel too far on Boxing Day, but there are still thousands of fans missing out on attending sport with their families.

Ticketmaster’s State of Play research (http://www.ticketmastersport.com/stateofplay) shows that family time is a major reason for attending sporting events and Boxing Day stands out as one of the biggest on the UK calendar for family gatherings. At the same time, there were 350,000 seats left empty in stadia around the country because teams were playing away games. So, we have empty seats and families desperate to fill them. This is an open opportunity for rights holders.

This is an opportunity to promote Women’s Football to a fanbase that would not normally attend. The FA could schedule local derby matches which would give greater context to the match whilst enabling both the home and away teams and spectators to easily attend the game.

Here is a list of matches that would have been possible in 2018; had these gone ahead it would not only have made for an effective promotional campaign for women’s football, but I am sure clubs would see good attendance figures.

There are, of course, mis-matches above although I am not sure that matters (it doesn’t for the men’s FA cup). There could also be issues with policing these events when another football match is happening just down the road but this can be managed with scheduling across 26 and 27 December.

Rugby fans in the same situation

This “away day” problem for fans is even more apparent in rugby union. When Boxing Day falls mid-week, as has just done, it is not possible to schedule a match without cancelling one of the weekends either side to allow for proper player recovery time.

Other teams (e.g. non-league, schools, Barbarians) could step up and take on the annual Boxing Day slot at each of the 12 Premiership Rugby grounds. It would not take much for this to become part of the Christmas holiday routine for rugby loving families; perhaps something for CVC to consider as part of their new investment in the sport.

For both of these examples, ticketing is going to be the greatest revenue stream for those involved and costs will be manageable without the larger player fees to consider. Focusing on marketing the event well and investment into the fan experience will be crucial in creating an annual, much anticipated event for football and rugby fans.

Furthermore, without this match being confined by the usual playing conditions or regulations (these matches would not be part of the Women’s Super League for example) they could involve star players drafted in from the US leagues to provide an additional layer of interest for fans. It is also an excellent time to involve charity initiatives as Sunderland have done so successfully with their recent “Gift of Football” campaign. There are a multitude of possibilities!

Christmas time is all about bringing people together after all. I love Boxing Day sport and think there there is huge potential for organisations and clubs to promote women’s sport, provide opportunities for lower league teams and reach out to communities around the UK.

The sports industry is changing & at InCrowd, we help our clients adapt & evolve. Using technology and insight, we give rights holders & their commercial partners the power to deliver personalised content and experiences, for every fan.

Find out more at www.incrowdsports.com