You are here: Home1 / crypto currency 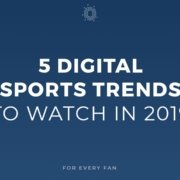 InCrowd’s Dan Lipman takes a look at the top five digital trends and discusses their impact on the sports landscape in 2019 and the future.

1 – Virtual Reality (VR): Is it now or never?
Although forecasters predict that the VR industry will grow by 700% in the next five years, increasing to a whopping £169 billion, VR remains the most polarising topic in the sports and tech industry right now. Major brands, right holders and players are throwing their weight behind it. Prime examples include Ceek’s partnership with Dani Carvahal which will show behind the scenes access to his life at Real Madrid, European Tour allowing fans to take VR tours of famous courses and European Championship Athletics recently launching their own VR app. Perhaps 2019 will be the year that the VR debate can truly be decided.

2 – OTT: The opportunity with owned audiences has never been greater
OTT seems to be the topic on everyone’s lips right now. The recent Premier League and EFL broadcast negotiations have been fascinating, in particular the impact of the increasing capability of rights holders to deliver higher quality OTT to their growing audiences. With a recent Facebook study showing that 45% of live audiences would pay to see a favourite athlete, team, or performer on an online stream we’re certain to see more innovation in this area. Eleven Sports new “room” functionality, which allows stream viewers to invite up to four other people to watch a specific live event, is a great example of this innovation. While in the room, users can see, hear and message each other during the live broadcast of the game.

3 – Betting: US online betting landscape takes shape
At the time of writing, eight states now have full-scale legalised sports betting, up from two since the New Jersey bill was passed 5 months ago; another 23 states are not far behind. Since then it’s been hard to keep up with the news, from organisations across sports data, technology, casinos and rights holders getting on board. In the last week alone, The NBA announced its first betting data partnership with Sportradar and Genius Sports & Major League Baseball teamed up with MGM Resorts International to manage their sportsbook. With these sporting superpowers shifting into high gear, 2019 is going to be an enthralling year for the sports betting industry in the United States.

4 – E-sports: The worlds of e-sports and traditional sport will become ever more intertwined.
With more fans tuning in to the League of Legends tournaments than the Super Bowl Final and numbers closing in quickly on the scale of the Champions League Final, it’s no wonder sports bodies are moving quickly to get a piece of the e-sports action. Whilst it’s now increasingly common for most sports clubs to have their own dedicated e-sports team, the trend on the rise for 2019 is the in-game partnerships that are starting to emerge. The NFL are one of the rights holders leading the pack, with their virtual shirts and shops in partnership with Epic Games’ Fortnite; NFL team “outfits” are now available in the Battle Royale Item Shop for fans to purchase – very cool! Keep an eye out for more of your favourite sports teams appearing in the virtual universes.

5 – Cryptocurrency: New revenue streams emerging
It’s no surprise that Crypto brands have very quickly seen the attractiveness of partnerships within the sports industry. And it’s an exciting time for audience owners in sports with a new revenue stream presenting itself here; not a common occurrence. We’ve seen big rights holder partnerships announced over the last 18 months such as Arsenal and Cashbet and many with players like Lionel Messi, Sirin Labs, Eden Hazard and Sergio Aguero endorsing All Sports Chain. Some players have launched their own crypto-brands like Ronaldinho with Ronaldinho Soccer Coin and James Rodriguez and his JR10 token. In 2019, it will be worth watching how these partnerships start their activations; the Ronaldinho Soccer Coin will give fans access to so-called “digital” stadiums, real-world grounds with the technology to record and analyse player performance. According to WSC, Ronaldinho Digital Stadiums will be developed in 300 locations around the world, with construction plans already “confirmed” for over 10 locations.

So what can you do to keep up with the fast-paced change of the digital sports landscape? Give us a call, or drop us an email to find out more!