You are here: Home1 / final 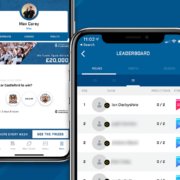 One fan who will be paying even more attention to the Betfred Super League semi-finals than usual is Wigan Warriors fan Ian Darbyshire. Ian has been an OurLeague member since its launch in October 2017 and a regular player of the OurLeague predictor. His recent streak of 22 correct predictions, dating back to 17th August, makes him the best performing predictor player of the season. In fact, Ian is one of only five out of 30,000 players to reach a streak of 20 or above.

Ian’s impressive feat has already won him the September leaderboard prize of 4 hospitality tickets to the Betfred Super League Grand Final, in which he could see his side, Wigan Warriors, compete for the trophy if they make it past the semi-finals on Friday 5th October.

There is however a more significant personal prize within Ian’s reach; his active streak of 22 leaves him just 3 correct predictions away from winning OurLeague’s £20,000 Predictor jackpot prize. In order to win, Ian must correctly predict the outcome of St. Helens vs Warrington Wolves, Wigan Warriors vs Castleford Tigers, along with the first try scorer of the latter game. Keep a close eye on InCrowd’s Twitter and Instagram accounts as well as industry press for the outcome.

The InCrowd team would like to wish Ian luck, and in keeping with the Super League message for the Grand Final, encourage him to ‘Dare to Dream’.

OurLeague is the Rugby Football League’s membership platform powered by FanScore and developed in partnership with InCrowd. The platform provides exclusive content, live streaming, a host of member benefits and engaging interactive touch points for rugby league fans including polls, live Man of the Match voting and the season long predictor competition. To find out more, contact enquiries@incrowdsports.com

Nichola Spencer, Membership Manager at the Rugby Football League said, “Since its launch at the end of 2017, membership of OurLeague has increased massively and now has nearly 70,000 registrations. The OurLeague Predictor is a fantastic way for fans to engage with each game and win incredible prizes. We’d like to wish Ian the best of luck in his predictions tonight and tomorrow.”