You are here: Home1 / League Of Legends

Tag Archive for: League Of Legends 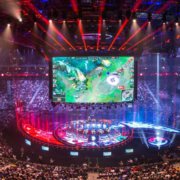 It is no secret that the world of eSports is growing rapidly year on year, with bigger tournaments and larger prize-pools attracting a worldwide audience of gaming enthusiasts. The International, arguably one of the largest eSports events on the calendar, has seen unprecedented, consistent growth since its inception 2011 with a prize pool of over $24.75 million at the 2017 tournament, a majority of which is funded directly by players of the game. Often selling out traditional sports stadiums with audiences of 50,000+ combined with online viewership soaring above 60 million (in the case of the League of Legends World Championship 2017), eSports are increasingly giving traditional sports a run for their money.

With greater presence and an ever-increasing audience comes a tangible opportunity for sponsors to engage with fans. In March 2018 it was announced that Snickers would be the official sponsor for Season 5 of Rocket League RLCS (2018), joining the likes of Old Spice, Mobil1 and StateFarm who are also holding sponsorship positions. This takes an interesting side-step from other tournaments which are typically sponsored by gaming hardware (and related) brands such as PlayStation and G FUEL in the case of Call of Duty World League Championship 2017, and Alienware, Dell and HyperX in the CS:GO ELEAGUE Major in the same year.

Where exceptions do exist, it has previously been the more prominent title sponsorship positions that have been taken by brands which appeal specifically to a gaming audience. It is clear that as the term “eSports” becomes more mainstream, so too do the brands sponsoring it; and since virtual sports have evolved so rapidly over the last few years, it seems the lines between the two camps are becoming increasingly blurred.

The RLCS along with many other eSports tournaments is streamed to fans via the world’s most well known dedicated live-stream gaming platform, Twitch. Now owned by Amazon, the service saw 43.6% of live streaming traffic in the US in 2014. However, when it comes to advertising, the key difference between traditional sports and eSports is the way in which sponsors are using the platform to better engage their audience.

“Spamming” is no longer a bad word

Snickers sponsorship of RLCS is a great example of a brand recognising the need to interact differently with their audience, given the new challenges which eSports pose to advertisers. Everyone is familiar with this confectionary giant; yet it is clear that the marketing team behind the nutty snack went out of their way to appeal to a cohort who are not used to (or keen on) long drawn out, high-budget, advert breaks. The centrepiece of their RLCS campaign is an amusing 30 second video punctually shown after each game finishes, featuring a news anchor blindly following autocue prompts from an operator who has fallen asleep on his keyboard due to being “sleepy” – Snickers being the obvious cure to this predicament!

While the anchor and weather presenter are stuck mumbling “AAAAAAAAAA”, the viewer is left to question what would cause the presenters to babble such drivel. A very simple premise with a straightforward punchline.

The beauty in this campaign, however, is not the use of an amusing video on its own – Snickers have realised the value in the in-stream chat utilised by viewers who have signed in through Twitch.

Seemingly one doubtless, timeless fact concerning gamers when presented with a chatroom is that they will inevitably spam it – the act of repeatedly posting the same word or phrase over and over again. “AAAAAAAAAA” is a very easy phrase to type, and even easier to copy/paste. Viewers of the Snickers advert during the 2018 RLCS stream were unable to contain themselves when Snickers handed them the opportunity to spam this brand message for the full 30 second duration and beyond.

In a previous InCrowd article, Seb Lear wrote about the importance of “talk value” in a recent Bud Light commercial. This is a perfect example of what I would like to coin; “spam value”! Gaming fanatics relish the chance to be part of the mischief of spamming and in doing so, reinforce the message and draw attention to the ad for all viewers.

Granted, the Snickers ad is not exclusive to RLCS streams, but the marketing team behind this have demonstrated appreciation for the worth of achieving “talk value” in the stream by introducing the Snickers branded “AA” emoji (see below). Relevant and on-point, when appearing inline this emoji stands out from the rest of the chat, unashamedly drowning out all other messages to give itself prominence.

Participation requires that viewers sign in with their Twitch account, but anyone is free to view the stream without doing so; so what if they haven’t signed in? Rocket League are a step ahead – anybody watching the stream through a connected Twitch account is rewarded at random with in-game items unique to Season 5 of RLCS. Once RLCS is over, the items can no longer be obtained, making them rare and collectible. This keeps the fans watching and interacting, and once logged in, there’s no reason not to participate. Rocket League has traditionally taken full advantage of distributing branded in-game cosmetic items since it was released, with notable partnerships from; DC (comics), Nvidia, Rick and Morty, and WWE.

Be aware that our attention span is minimal

As a viewer, it is clear how impactful the Snickers campaign has been in this RLCS series. This may in part be down to the fact that the core viewer demographic is currently considerably more defined than that of traditional TV-based sporting championships. With the average eSports viewer being male between the ages of 18-24 (across Europe in 2016), the majority of the viewership is no longer used to being bombarded with 5 minute commercial breaks which interrupt content. This audience wants something quick, to the point and engaging.

This case study indicates a swing away from ‘lazy’ traditional advertising towards a new era where engagement is key – a move which we are seeing in other sports too. The success of this is clearly demonstrated in the viewer responses in which Snickers is met with a barrage of ‘spamming’ on a level which surpasses that of a game winning goal being scored. The value of a single, appropriately targeted ad, is of considerably higher value than many which are not.

eSports are no longer playing catch up

In many ways, eSports are becoming increasingly similar to mainstream traditional sports. Starting from humble beginnings as one-off LAN events and slowly building towards specialized global tournaments, eSports are now seeing booming revenue and increased following, with one estimate suggesting that by 2020, collective eSports viewership will exceed that of baseball in the US. eSports has provided a platform for change and diversification from mainstream counterparts – targeting a new type of audience with innovative use of technologies. The necessity to target viewers in more meaningful, platform specific ways has enabled eSports to offer a more compelling fan experience.

Fan-centric experience has always been the natural direction for eSports in particular given that their developers lean towards this mindset in their day-to-day working. Compared to traditional sports, eSports have been offering predictors, rewards and stats trackers since their inception, and it is good to see how eSports are also beginning to forge their own path in regard to sponsor interaction.

I am in no doubt that new exciting ways to captivate fan interest will continue to be refined into the future as the success of moments like these are realised.

I leave you with a selection of top plays in the RLCS EU promotion tournament: