You are here: Home1 / mobile ticketing 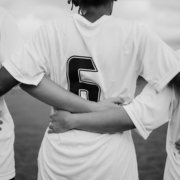 As we all come to terms with the global impact of the Covid Pandemic, we continue to face a much longer-term and deeper ingrained malaise; racism.

Racism is a centuries-old epidemic, which has manifested itself in sport. Immediate thoughts may turn to the historic symbolism from the United States, created by the actions of athletes that have made a stand. From the black glove gesture used by athletes at the 1968 Mexico City Olympics to Colin Kaepernick leading NFL players to take a knee during the National Anthem in opposition to the RealDonaldTrump. These gestures of protest against systemic problems created noise; pushing an important conversation forward.

However, when we think of racism in the bigger football markets in Europe, rather than gestures by athletes, we are drawn to the historic problem of active racism within the arenas themselves. In 2005, Marco Zoro attempted to stop the Messina–Inter match by leaving the field with the ball after being tormented by taunts from some Inter supporters. This is just one example of a litany of racist abuse, monkey chants and banana projectiles directed at black players that have left an ugly stain on the game since the 1970s.

Are we seeing enough change?

At InCrowd, we often talk about the changing consumer in a positive light and the impact the change is having on how sports are followed, watched and attended. But is there evidence to suggest that this change is having a positive impact on our attitudes to race and other forms of discrimination?

Unfortunately not it seems. Earlier this year Chelsea defender Antonio Rudiger was seen complaining to the referee, with a gesture of putting his hands under his armpits, to indicate that he believed he had been subjected to racist monkey chants from rival Tottenham supporters. Last year Romelu Lukaku said that the sport was “going backwards” on racism after he was on the receiving end of similar abuse from Cagliari fans.

Kick It Out, a charity established in what was meant to be the back end of the bad old days of racism in 1993, aim to fight against discrimination in football but their most recent statistics show that the problem is escalating again. Reported incidents rose to 422 in 2018/19, up from 319 in the previous year.

The numbers could actually be a lot higher than reported. These statistics rarely tell the whole story; there are many barriers for people in regards to reporting these incidents both culturally and logistically (although you can now report via social media).

Are we taking action?

A more pressing concern is that these are just statistics and don’t seem to lead towards enough positive, affirmative action. According to the report, the FA have not informed Kick It Out of the outcome in seventy-nine per cent of the 109 cases reported in grassroots football and 80% of the County FA verdicts. So whilst plenty of energy is going into trying to solve the problems at the grassroots level through education and reporting, there does not appear to be a strong system of governance in place to effectively deal with these issues when they are surfaced.

The rise of technology

Changes in consumer behaviour have been seismic, driven by technology and the rise of the smartphone and social media. And yet despite the ability of these platforms to offer real-time conversation and direct interaction, there has been minimal positive impact on attitudes to race and discrimination. Furthermore, not enough is being done to tackle the problem, especially considering we are now in a time when technology makes it far easier to hold people accountable.

This does all seem counterintuitive. When we talk about the changing consumer we are normally talking about the rise of the “woke” generation. However, such technology and social media are used by everyone else too and there is plenty of strong evidence to suggest that placed in the wrong hands, these platforms can be abused to deepen the problem rather than open up a conversation and reach resolutions. We are not just talking about Putin’s election rigging bot farms and Cambridge Analytica here but more nuanced systematic issues.

A report earlier this year described a “data racism” emerging. It argues that as automated or data-driven decision-making tools are increasingly deployed in numerous areas of public life, these data technologies are actually reinforcing or codifying the systemic race bias and increasing the sense of neutrality afforded to discrimination. If the computer says no, what can I do…? An example of this bias would be using facial recognition tools in crime investigation, despite evidence that they misidentify people of colour, and in particular women.

The potential positive role of technology

So how can technology be used to drive positive change? By using technology to develop relationships with fanbases, sports organisations can hold themselves to higher standards of inclusivity and try to effect positive behavioural change amongst their devoted supporters. Technology could also help surface and deter the problems by making the process of reporting incidents far easier and perhaps more significantly, enable the ability to pinpoint and deal with the problem more efficiently and effectively.

Imagine if you could report a problem by pressing a button on the official app and highlighting the seat number of the offender. Imagine if all tickets were digital and tied to a device so you also knew immediately who was sitting in the offending seat. If this wasn’t enough to deter a problem fan, it would certainly be enough to take appropriate action. You don’t have to imagine. This technology exists, it just isn’t widely enough implemented.

Hopefully, we all agree that it is no longer acceptable to just sit on the sidelines being passive; we must all be actively anti-racist. And in sport, let’s consider every tool that is available to us, and utilise what we have to make sure that we can deliver the same great experience for spectators, players, officials, staff – #ForEveryFan. 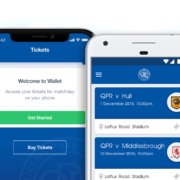 Both matchday and season tickets have been available in the official QPR app to those who opted into the trial phase in September 2018 and are now available to all fans attending games at Loftus Road via a personal in-app ticket wallet. Available to QPR fans for the last five home games, 12% of fans are now using the new ticket wallet to enable stress-free access to Loftus Road on match days.

Individuals that purchase multiple tickets can also ‘share’ tickets with other supporters via the official QPR app; a much more efficient and secure process than exchanging physical tickets. To activate their tickets securely, recipients are asked to download the official QPR app and register their details providing the club with the data required to know exactly who is in the stadium, improving safety creating more direct connections between QPR and their fans. Perhaps most importantly, tickets can be transferred between mobile devices and between operating systems; believed to be a first for mobile ticketing in UK sport.

The QPR ticket wallet also features a range of anti-tout mechanisms all of which are highly configurable according to a client’s specific requirements. These mechanisms include hidden barcodes, device locking, screenshot prevention and several other features that provide a sense of security to not only the fans but to the integrity of the club.

The ticket wallet technology created by InCrowd enables fans to enjoy a seamless, stress-free and engaging journey from their front door to their seat in the stadium. The official QPR app also provides fans with a set of team and venue specific features and exclusive content. This delivers an unrivalled match day experience for the fan and provides QPR with the ability to connect the ticket holder to a previously anonymous device, significantly improving their marketable database.

David Scriven, Digital Content Manager at QPR says, “The QPR Ticket Wallet has helped simplify the matchday for fans at Loftus Road. Not only can fans now access the latest news at the push of a button they can also access the stadium with one. By working closely with Ticketmaster and implementing this advanced, fan first technology from InCrowd we’ve been able to deliver a unique product in an efficient manner with significant upsides to supporter experience and the businesses digital objectives.”

“Digital ticketing is the future. It’s easy for fans, provides venues and events with more ways to engage with them and increases security for all,” says Ian Sanders, Director of Ticketmaster Sport “This integration with InCrowd demonstrates the ability Ticketmaster Sport has to work with partners in exciting and innovative ways. It’s been great to work on this project and we’re looking forward to rolling this out to many more of our clients in the near future.”

To benefit from this one-of-a-kind ticketing service please contact enquiries@incrowdsports.com