You are here: Home1 / one year

Tag Archive for: one year 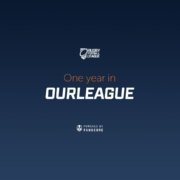 Just over a year ago, The Rugby Football League (RFL) launched their membership platform Our League in partnership with InCrowd. The RFL had approached InCrowd to realise their ambitions to build a world leading membership platform for spectators, viewers and participants of rugby league.

Plans for a membership website and mobile app included exclusive content, member benefits, participation features, a ticketing integration, gamification and polls to help improve the fan experience and drive return on investment for The RFL. All parties were full of expectation, but no one could have imagined the success delivered by Our League. In a single year, some of Our League’s achievements include:

The success of these fan experience initiatives by InCrowd and The RFL has been driven by the eager participation of an enviably diverse rugby league fan base, devoted to a sport that delivers competitiveness, entertainment, passion and pride with down to earth, approachable players and coaching staff. In its first year, the Our League membership platform has welcomed 84,000 members, 65,000 of which have downloaded the Our League app which has achieved an 80% active app user rate. The regular Man of The Match vote and other polls boast over 300,000 engagements throughout the Betfred Super League season, with the Betfred Man of the Match polls over a 10 minute period averaging 3,500 votes, and other polls returning an average of 2,200 votes.

Active participation is also driven by the exceptional prizes on offer to Our League members playing the round-by-round predictor. Just this year, we have seen over 13,000 fans win prizes including signed England shirts and rugby balls, hospitality tickets to the 2018 Ladbrokes Challenge Cup Final and Betfred Super League Grand Final and tickets to see the England vs New Zealand internationals. Four predictor players came within four correct predictions of the £20,000 grand prize. Other Our League big prize winners included:

“The success of Our League has more than surpassed our expectations. Our active membership numbers are constantly increasing and we are smashing record after record in terms of users and participation. The team at InCrowd have really taken the time to understand our sport and our fans and continue to provide an exceptional service. We are excited about what we will achieve together in the 2019 season, delivering an even better experience for our unique and passionate fans”, Nichola Spencer, Membership Manager at the RFL

Darren Parsons, Marketing Account Manager at InCrowd stated that “it has been a pleasure working with The RFL in this inaugural Our League season, building the foundations of their membership platform for fans to enjoy for years to come. We have immense pride in what we have achieved with The RFL in just one year and we are looking forward to continuing this successful partnership in 2019.”