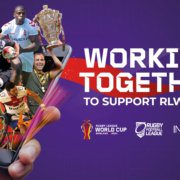 The Rugby Football League, Rugby League World Cup (RLWC2021) and InCrowd and are thrilled to announce that RLWC2021 will stage a takeover of the Our League app this autumn.

The takeover will begin this month with regular Rugby League World Cup news being served to fans within Our League, as the final countdown to the tournament begins.

Then from mid-October, after the Betfred Super League and Women’s Super League Grand Finals, Our League will be devoted to the biggest ever celebration of Rugby League – as the Men’s, Women’s and Wheelchair World Cups take centre stage, bringing World Cup content to Rugby League fans all over the world.

All the Our League features – Match Centre, Player of the Match polls, the Predictor Game and much more – will be given an RLWC2021 makeover which will remain all the way through to Finals weekend in late November. With Our League already serving a membership of more than 190,000 League supporters, RLWC2021 will have a flying start in developing a regular conversation with Rugby League fans. Mark Foster, the RFL’s Chief Commercial Officer, said: “This is one of the most exciting partnerships since we launched Our League nearly four years ago.

RLWC2021 offers the sport of Rugby League its most exciting platform, and their takeover of Our League is the perfect way of bringing the tournament to life – both for existing loyal fans, and also the thousands of sports lovers who will be experiencing Rugby League for the first time.

We’ve spent the last four years working closely with InCrowd to develop Our League, ensuring it provides the features, information and rewards that Rugby League fans want, in an accessible and interactive way. The RLWC2021 takeover will take Our League to a new level – allowing new Rugby League fans on both sides of the globe to immerse themselves in our sport.”

B Hunter, RLWC2021 Digital and Content Director, said: “We are delighted to be working in partnership with the RFL and InCrowd in developing Our League for RLWC2021.

“The app will be the go-to source of information and entertainment for fans during the tournament. We encourage fans to download early to make sure they receive all the latest news, ticket and spectator information direct to their devices.”

“In this relationship with the RFL and InCrowd we are also proud to be able to make an investment back into the sport that will serve fans as a lasting legacy of the World Cup.”

Darren Parsons, InCrowd Senior Account & Insights Manager, said “We’re delighted to be able to support RLWC2021 by using the existing Our League platform to engage current users and those new to rugby league.

The Our League app has proven to be incredibly valuable in growing first party data for the RFL which has led to the delivery of rich and personalised content experiences direct to fans.

We’re very proud to work with both The RFL and RLWC2021 on this collaborative project and we’re excited to develop existing and new features for the tournament takeover and beyond, which will drive a boost in users and build on the already great legacy of Our League.”