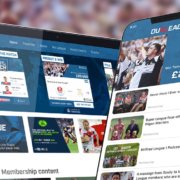 In 2017, InCrowd partnered with the Rugby Football League (RFL) in order to build, launch and deliver priceless experiences for fans in time for the 2017 Rugby League World Cup and the 2018 rugby league season.

The Rugby Football League (RFL) approached InCrowd to realise their ambitions to build a world leading membership platform for spectators, viewers and participants of rugby league. Plans for a membership website and mobile apps included exclusive content, member benefits, participation features, a ticketing integration, gamification and polls to help drive fan experience and return on investment for the RFL. The launch was planned to perfectly coincide with the 2017 Rugby League World Cup (RLWC2017) in Australia, giving new members the chance to support England in their quest for glory.

InCrowd provided the necessary resource and expertise to ensure the deadline was met, resulting in the on time launch of the official Our League app and website. InCrowd worked with many of the RFL’s partners integrating Tickethour, and a loyalty scheme via Rewards4 Rugby League. Working with StreamAMG, the platform also saw live streaming of a match 4 days post launch, which proved a successful addition to increase registrations with over 40,000 live views of England’s warm up fixture against Affiliated States. Live streaming was also delivered for the Women’s Rugby League World Cup (WRLWC2017).

Fans were able to fully immerse themselves in the RLWC2017 and WRLWC2017 for free, including behind the scenes content and huge prizes, including Ladbrokes Challenge Cup Final ticket discounts, signed England shirts and premium tickets to all major UK rugby league events in 2018. The Grand Prize was an all expenses paid trip for two to Australia, to watch the RLWC2017 final. One lucky member, Neil Cunliffe, and is wife were flown to watch England in the final in Australia as a result of finishing top of the membership leaderboard after the Quarter Finals.

After RLWC2017, work was extended to the 2018 Rugby League season. In the first seven weeks of the season the Our League platforms powered by FanScore had already seen nearly 12,000 participants in the Betfred Super League predictor game and consistently receives 3,000 – 4,000 Betfred Man of the Match votes, thanks to InCrowd’s first live participation TV initiative with Sky Sports. Since launch, over 12k Our League members have voted for their Man of the Match.

“Membership is a significant step forward for the Rugby Football League. In September we didn’t have anything and now in February we have a membership system with over 36,000 active members.”

Working with Sports Technology Group (STG) and FluidCM we have been able to deliver a rugby league player dashboard showing stats and comparison to other players within a player’s division.In addition to this, InCrowd and the RFL have big plans for the future of Our League. These plans include a wider ranging comparisons within the player dashboard, a Betfred Super League to community leagues match centre, private predictor leagues, head-to-heads, coaching content and personalised membership experiences. We are excited about our continuing work with the RFL to engage the rugby league audience.

For more information, or for details on how InCrowd can help you reach out to your fans, please contact enquiries@incrowdsports.com

InCrowd provide a fan engagement & sponsorship activation platform. Our understanding of the avid and emotional mindset of a fan is combined with in-depth data analysis and ground-breaking digital technology to offer rights holders and brands a unique opportunity to reach out to sports fans in the moments that really matter. Many of the world‘s top rights holders & brands use InCrowd’s fan marketing platform to collect more fan data, sell more tickets and increase sponsorship revenue. We also help sponsors connect with new customers and convert fan interaction into revenue & advocacy. 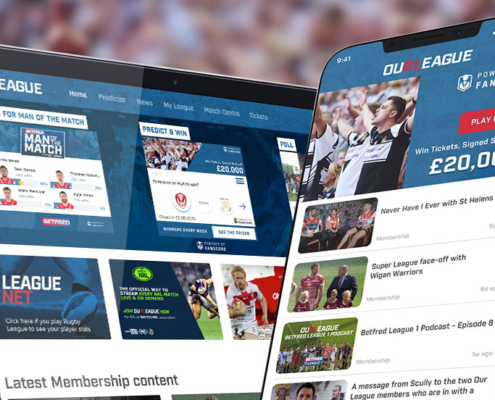