You are here: Home1 / Southern Hemisphere 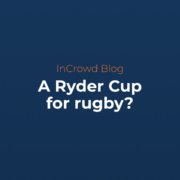 With a hugely successful 6 Nations behind us and Rugby World Cup approaching, I look at how rugby fans are treated to relatively little international competition rugby and how a few small changes would create a compelling tournament with similar aspects to golf’s Ryder Cup.

If we have any more days like Saturday (the final day of the 6 Nations), 2015 will be a boon for rugby fans and players alike, not to mention for sponsors, broadcasters and merchandisers. I am a rugby fan but it is the first time I have watched three back to back matches.

But the excitement surrounding the 6 Nations and the World Cup is a stark reminder of how little international competition rugby we are treated to in the UK. British teams, like their Southern Hemisphere counterparts, rarely compete in more than one tournament annually. Around the big competitions, we as fans snack on friendlies such as the Autumn Internationals, an annual tour of Southern Hemisphere teams to the UK, which while compelling, lacks the building narrative of a league or knockout format.

It is this narrative that had us all enthralled at the weekend, it is this narrative that would have a Welsh fan rapt by a Scotland vs. Argentina game, if it would indirectly affect the fortunes of their national team. As it happened, the friendly I have in mind in November 2014 didn’t even hold much allure for the Scots themselves; Murrayfield was left almost half empty.

The irony of the Autumn Internationals is they consistently boast the world’s best players, greatest showdowns and higher concentration of top ranked matches than the Rugby World Cup. Nearly half of its 2014 friendlies had winning margins of less than one try, yet we struggle to recall those winning moments. They simply didn’t matter as much to the fans, the press or the big business that surrounds our sport.

Rugby’s governors would merely have to tweak the Autumn Internationals to create a more exciting – and lucrative – competition. Considering the political and logistical impediments to changing international schedules, the most difficult part of what I propose (finding time in the schedules of the world’s greatest players and buy in from the governing bodies) has already been achieved.

The annual spectre of the Autumn Internationals could be refashioned into an annual tournament pitching the best of the Northern and Southern Hemispheres against each other. Think the Ryder Cup meets Lion’s Tour, think Super Bowl or Grand Final, think All Stars vs. Barbarians. If England’s recent World Cup performances in cricket and football are anything to go by, we may need another tournament.

Excited fans also attract business. The 2015 World Cup will generate broadcasting revenues in excess of £100m and sell over 2.3 million tickets. The 6 Nations generates £300 million in revenue each year, double that of the RFU (England’s governing body) a substantial amount of whose income comes from the 6 Nations. The Autumn Internationals could be much more profitable for each nation with the added ingredient of narrative.

Firstly, take the top six teams from each hemisphere:

Grand Final
Following the end of the group stage, the top team from each Hemisphere would play a Grand Final worth double points for their Hemisphere. The build up to this final would be immense, there would not be a neutral supporter in the world.

Cricket, football and athletics each have successful secondary tournaments that don’t come around every year. There’s little obstacle for World Rugby to follow suit. I can’t wait for the World Cup but I don’t want to wait another four years to see England play competitively against the likes of Australia, South Africa and New Zealand.