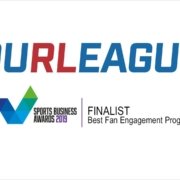 Our League, the Rugby Football League’s membership scheme for fans, players, coaches, volunteers and viewers, has earned the game further national recognition with a nomination in a second major sports awards ceremony this spring.

Our League is in the running for a Sports Business Award on May 31 in the Best Fan Engagement Programme category. This is the second award nomination of the awards season, having already been included on the shortlist for Best Fan / Community Engagement for the BT Sports Industry Awards on April 25. This second nomination comes after Our League recently celebrated breaking through the 100,000 members milestone, showing just how much Rugby League means to the fans.

Mark Foster, the RFL’s Chief Commercial Officer, said: “It’s great to have this recognition for the sport, and also for the people who have worked so hard to establish and develop Our League since it was launched in late 2017.“It was the first Rugby League OTT platform, allowing more matches and features to be broadcast and watched than ever before – and a pivotal part of our strategy for ensuring that Rugby League is well-placed to capitalise on the opportunities provided by the digital revolution.”

Launched in Autumn 2017 in partnership with InCrowd, the membership scheme has improved fan experience and engagement for lovers of Rugby League at all levels of the game, offering exclusive content, predictor games, ticket offers, money can’t buy benefits and prizes via the digital platforms – app (iOS & Android) and website that members can access. This season Rugby League personalities such as Andrew Henderson and Jamie Jones-Buchanan have led extensive coverage of the Betfred Championship and League One competitions, focusing on the best tries and matches through the week – as well as providing live and exclusive coverage every weekend.

This weekend (30th March) focus turns to the Coral Challenge Cup, with the Our League cameras focusing on the famous St Helens amateur club Thatto Heath, and their attempt to spring an upset against North Wales Crusaders. That will be followed by a blockbuster opening fixture from the fast-growing Women’s Super League on April 7, as Wigan Warriors launch their defence of the title against fierce local rivals St Helens.

Darren Parsons, Marketing Account Manager at InCrowd said, “Recently smashing the 100K member mark, Our League continues to be a great project to work on in close collaboration with the Rugby Football League. It’s been amazing to see fans from all corners of the Rugby League community come together and find something to engage with on the platform; it’s fast becoming an absolute must-have, for every fan.”